All you need to know about Rhea Ripley's boyfriend 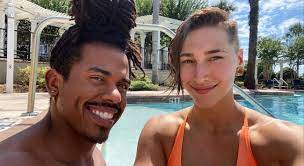 The reigning RAW Women’s Champion is just getting started with her title reign. Ripley was born in Australia, and in quick time, she has become one of the most popular Superstars in the WWE.

The fans are more interested in knowing about her personal life now. Some of them might know that the current WWE RAW Women’s Champion is currently dating a pro wrestler named Demetri Action Jackson.

In case you didn’t know, Demetri, real name Kevin Ortiz is a male professional wrestler who is currently wrestling in the indies. He is a professional wrestler as well as a weight lifter. His Instagram user ID is @theactionman_. You can see two photos of Demetri with Rhea Ripley, which he uploaded on his profile a few months back.

The two professional wrestlers seem to be in a great relationship right now. Jackson has a Puerto Rican descent and like Rhea Ripley, his residence is in Orlando, Florida.

Rhea Ripley’s journey after WrestleMania 37 will be very tough

While Rhea Ripley became the RAW Women’s Champion just a few weeks after her official main roster debut, to stay at the top will be a difficult thing for The Nightmare.

The reason behind that is Charlotte Flair has come back to Monday night RAW. The Queen has made her intentions clear to go after the RAW Women’s Champion. Also, Asuka is in the title picture.

After a reunion with the SmackDown Women’s Champion Bianca Belair and the new NXT Women’s Champion Raquel Gonzalez on this week’s NXT episode, Rhea Ripley will come back to RAW next Monday, and it will be exciting to see what happens next in the RAW Women’s title picture.