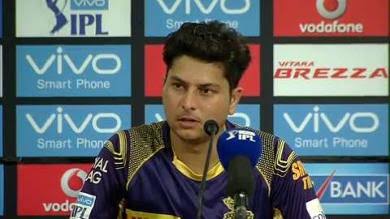 Since the last few months, he is no longer the first choice spin bowling option for Virat Kohli-led Indian cricket team, and Eoin Morgan led Kolkata Knight Riders and has been struggling to pick up the form.

But even after that, he plays a vital role for his team, the Indian cricket team and King Khan's Kolkata Knight Riders, and there's no denying that.

Despite his downfall, Yadav remains hopeful about playing his first game in the ongoing edition.#KKR #IPL #IPL2021 https://t.co/WZkwk499eh

He mentioned that Rohit Sharma is very calm and relaxed before picking his shots and thus has all the times while AB De Villiers, also known as Mr.360, can hit the ball at any corner of the ground.

"I find it difficult to bowl against AB de Villiers and Rohit Sharma. De Villiers can smash the ball in any corner of the ground, while Rohit has plenty of time," said the Chinaman bowler Kuldeep Yadav.

During the same interview, he was asked to name two players who he thinks are IPL legends. He took no time to mentioned Chennai Super Kings' captain MS Dhoni and Chris Gayle.

The Chinaman bowler made his debut for the Indian cricket team in 2017 in all of the formats of the game. He has picked up 105 wickets in ODI while 26 in Test cricket and 39 in T20 internationals.