As we all face a worldwide pandemic, many former cricketers have become active on social media (especially Twitter). They take the opportunity on the platform to express their views and opinions freely. One such cricketer is the Mumbai-born, ex-India player Wasim Jaffer. His tweets are humorous and witty. Sometimes, as a backlash, you need to take them with a pinch of salt.

Recently, a tweet was directed to him, asking him to express his views. The question read, "@WasimJaffer14, what do you think will Cummins become Aus captain?". This is what the cricketer had to say: "He's one of the frontrunners. But write his name in sand and not yet on paper😉", referring to the infamous sandpaper incident that happened in 2018. You can see the tweet here: 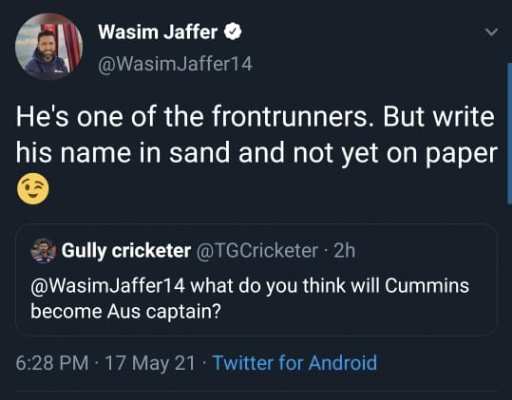 There have been contemplations over leadership roles in the Australian camp off late. With the ball-tampering scandal against South Africa in 2018, the leadership roles were snatched away from Steven Smith and David Warner, on immediate effect ever since there have been topsy-turvy decisions over the captaincy role in all three formats.

Could Pat Cummins be the solution to Australia's problems?

Tim Paine has been appointed as the test captain ever since and has some miserable outings. Eight losses and four draws in 23 matches as captain is not a convincing record, as per Australia standards.

In the limited-overs format, Aaron Finch has taken over since 2018. This was done after Tim Paine lost 5 out of 5 matches as captain in 2018. He was seemingly unfit for the role. Out of 41 games, Finch has led his team to victory in 23, having a win percentage of 56. However, Australia won the recently concluded ODI series against India.

In the shortest format, Finch's captaincy isn't as impressive as it is in the one-days. The Aussies have lost their last two bilateral T20I series against New Zealand and India. Since his captaincy debut way back in 2014, Finch has had a winning record of 53%.

This mounts to the fact that there needs to be a change in a leadership role in the Australia Team. If not for David Warner and Steve Smith, the Kangaroos need to find a new leader to lead the pack. With Cummins giving extraordinary performances for the side, he could well be the candidate.